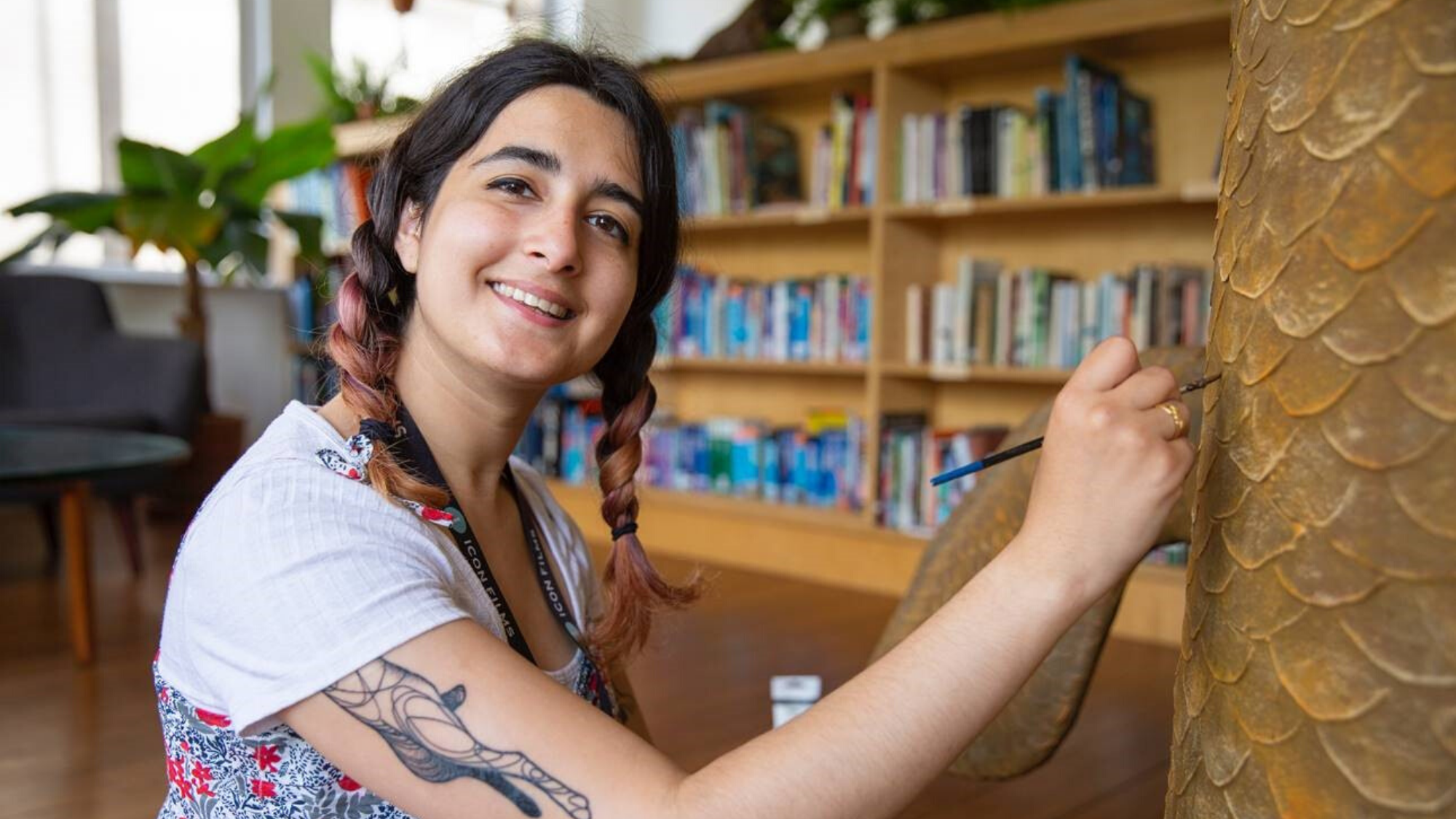 Farnaz became a Babbasa Youth Ambassador in 2019 and had big ambitions to transition from admin work to a career in TV. Three months later, she found herself working for an award-winning production company, Icon Films – something which she said has changed her life.

Farnaz explains her journey to starting her new career, what she’s been up to, and her plans for the future.

“It’s been busy – I don’t remember a day where I’ve sat down but it’s been really good. I’m working in an entry-level role in TV as a runner for Icon, which is a bit like being a receptionist as well. When I’ve talked to other people who are in the same role at other companies, they say they’re just making tea, but here, they’re so keen to push you in the direction you want to go in. All runners have mentors at Icon, so we have others trying to help us to achieve our goals. Everyone is really an investment.

It’s mad to think I’ve only started here 3 months ago because of Babbasa. I’ve been given so many opportunities to do stuff. I’ve made a treatment or two, helped out in development and research and I’ve done some more arty stuff too.

Down the line, I would love to go into development research. Icon has a role called development researcher, where you research subjects that you want to make into TV shows. You research people, places and topics, and see if the idea has any bite. My mentor is a development researcher, and she has helped me to get into researching some stories. I get the chance to see her in action as well, so I can understand more of the process, and how everything works. With the help of my manager, I can organise more meetings with people in the development team.

Before I started this role, I was working in admin office jobs, which weren’t related to what I wanted to do. The jobs were very stop-gap. I knew I wanted to go into TV but didn’t know how. I was trying to get runner jobs, but I was consistently getting rejected.

I applied to join Babbasa after a friend sent a poster saying ‘Do you want work experience at Icon films’. From that poster, I e-mailed Beaula, who really led the way. I went to a Spotlight Session last August, where Tracy from Icon talked about the company. The session definitely made me want to go into TV. They talked about the documentaries they had done, and how a good narrative really mattered, which really spoke to me.

I chatted to Beaula for a bit, about the sort of person I am because at that point, their Challenge Programme was full up. But she said to re-apply in January, and from there, everything happened so quickly. I did some work experience and 2 months later, an opportunity came up to be an Operations Coordinator at Icon Films.

I went along thinking I probably wouldn’t get the role, but then I was offered the role of Runner instead. To have gone from work experience to being in this job is ridiculous. I didn’t think it would be that quick.

I remember I was late to my first meeting with Babbasa, but Beaula still stayed with me to run through all of the questions. Mina made sure we had more meetings and took down all of the information needed. She looked over my CV and cover letter to make sure it was strong enough to apply. There was a lot of prep beforehand, and they made sure I had loads of information that I needed about Icon.

It seems obvious to research the company you’re hoping to work for, but they gave really useful tips. Once I got to Icon, the first week I was there, it felt like it was a dream. I felt like I was on the path to doing what I want to do, and I got a bit of imposter syndrome – but my line manager Tracy assured me that I deserved my place.

I don’t know what I would have done without Babbasa. They’ve changed my life. It’s hard because you know there are people around you who have great links and connections. I’m from a low-income background from East London and my parents are first-generation immigrants from Iran. I didn’t think there was a way in, but I took a chance. Babbasa has been really supportive – super-duper supportive, and I’m just really grateful. If I had enough money, I would do a partnership. The way they set up their networking events, and get all these people to come down and talk to young people is amazing.”